← more from
Sacred Bones Records
Get fresh music recommendations delivered to your inbox every Friday. 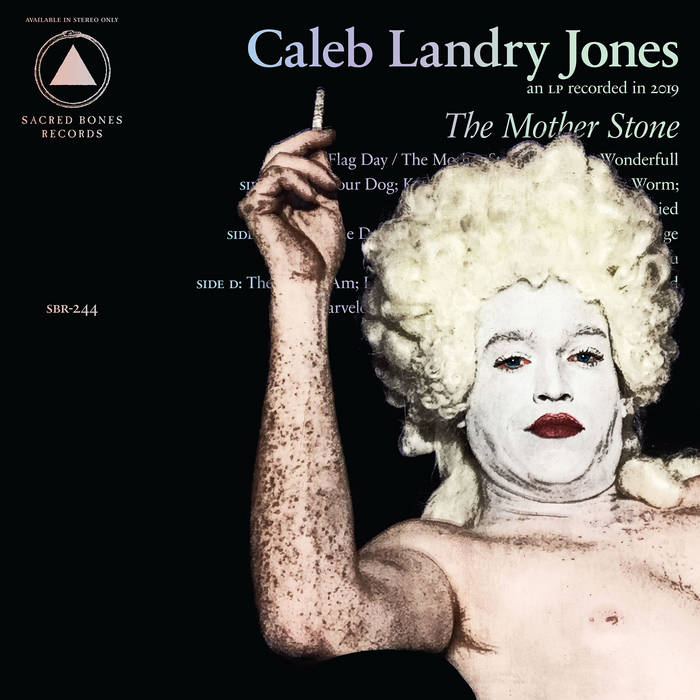 “I think most of it takes place in dreams,” Caleb Landry Jones says of his debut solo album, The Mother Stone. “I’m talking more about dreams than I am about what’s happened in the physical realm. Or I’m talking about both, and you’re not sure what’s what.”

This is the kind of conversation you end up having about a record like this one, a sprawling psychedelic suite built from abrupt and disorienting detours and schizoid shifts of voice, its manic energy forever pulling the tablecloth out from under classic pop orchestration. One minute you’re squarely in the realm of biographical fact and a moment later you’re having a discussion about lucid dreaming and how Jones once punched up a dream set on a soccer field by willing himself to experience it from the POV of the ball. But maybe that’s just another story about grabbing the wheel of your own hallucination; maybe this pertains to the music after all.

Some biographical facts: Caleb Landry Jones was born in Garland, Texas in 1989 and comes from a long line of fiddle players. Three, maybe four generations back, on his mother’s side. His grandfather wrote jingles for commercials, his mother was a singer-songwriter who taught piano lessons in the house, and his father was a contractor who did a lot of work for the Dallas music-equipment retailer Brook Mays and knew a guy if you needed a bass or a banjo. But Jones is not sure if you can hear any of this in his music and he does not play the fiddle.

What you can hear on this record are the marks left by conversion experiences, two in particular. First there’s Jones’ formative encounter with the Beatles’ “White Album,” the Fabs record most obviously composed by four Beatles rowing in different directions, and the beginning of what Jones calls “this British Invasion of my soul,” which is still ongoing. Second, there’s Syd Barrett, cracked vessel of Pink Floyd’s most intergalactic ambitions, and the “falling-down-the-stairs” quality of his solo work in particular. “I was dating a girl who was obsessed with him,” Jones remembers, “and the fact that I’d never heard him really pissed her off. So we went and got The Madcap Laughs and we listened to it and I could see why it pissed her off.”

“John keeps knocking at the door, and so does Syd,” Jones says of these songs. “And I’m in there somewhere. And so are a few other people, I think. It would be really boring if it was just one guy.”

Jones has been writing and recording music since age 16, around the same time he started acting professionally. Played in a band called Robert Jones for a minute, lost his guitar player to higher education, moved into his own place, and broke up with somebody, at which point the songs really started coming hard and fast.

In the ensuing years he’d spend a lot of time carrying unrecorded songs around in his head like goldfish in a bag, waiting for a chance to record them in marathon sessions in his parents’ barn. “You gotta play the songs every day, or every two or three days, to keep ‘em,” he says. “Otherwise I forget them.” Sometimes the ideas fuse together, one chapter to the next; this is how songs grow into seven-plus-minute epics like the ones on The Mother Stone. His back catalog is around seven hundred songs deep— a whole discography of full albums, most of them unheard outside the barn, at least for now.

Before long Jones’ other job started to keep him away from the barn for longer stretches. You may have seen him playing the drums on television as a member of Landry Clarke’s death-metal band on Friday Night Lights. You may have seen him in other things, too. But enough about acting, except for this: A few years ago Jones had a pivotal meeting with Jim Jarmusch, the movie director and musician.

“I was a big fan of his work,” Jones says, “and I know how I act with people that I’m big fans of their work. So instead of wanting to talk, I thought I’d write him a piece that would somehow let him know who I was.” So Jones spent a few nights composing a new instrumental work for solo piano, and showed up ready to play it for the director at their meeting— which turned out to be at a diner somewhere in Canada, where the amenities did not include a piano, so they had a conversation instead.

Jones did slip Jarmusch Microastro and Macroastro, two collections of songs from the barn, most of them four or five or maybe eight years old at that point. Jarmusch liked what he heard, told Jones he should talk to Sacred Bones founder Caleb Braaten, and before long Jones was making the record you’re about to hear— whose opening track, “Flag Day/The Mother Stone” incorporates that piano piece Jones wrote to explain himself to Jim Jarmusch.

A few more germane facts: The Mother Stone was recorded at Valentine Recording Studios, where everyone from Bing Crosby to Frank Zappa once logged time, refurbished to time-capsule retro standards in 2015 by studio manager and Mother Stone producer Nic Jodoin. Jones brought his collection of battered Yamahas and Casios up from the barn and played them alongside vintage equipment from Jodoin’s collection. Working in a real studio gave Jones a chance to slow his creative process down. They built the songs up from acoustic guitar, let them sit a while, circled back. Sometimes Jones and his girlfriend would decompress at the Shakey’s down the street, home to a range of acceptable video-arcade options. “They got that thing where you throw it in the clown’s mouth,” Jones says. “That’s fun. I like the look of those clowns.”

Maybe the clowns are the key. This isn’t a concept album, it’s a parade led by multiple unreliable narrators who rail against the universe and profess their love and vacate the stage before we can ask them a question. The circus comes to town, the circus leaves town. A young man from suburban Texas winds up and a clown opens its mouth as wide as the sky.

Bandcamp Daily  your guide to the world of Bandcamp

Kari Faux drops off her deluxe album 'Lowkey Superstar' plus tunes by Shunaji and Samplelov.